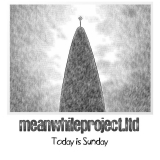 “Today is Sunday is a musical voyage, a journey that took about 2 ½ years to produce in the last resort. If you are willing to travel, you can go on a 50-minutes trip throughout various epic soundscapes, maybe accompanied by the ghosts of Pink Floyd or Mike Oldfield. Possibly you pass ambient and beat-inseminated lounges at the top of a desperate mountain-top, where you have a short discourse with Air and Moby, probably it all ends up in a nearly perfect pop or folk song, where Dido and Calexico decide to assemble for a short while. But nevertheless, there is a thread, a certain line that leads you all the way and that’s the one thing that sets this album apart from all the quoted ones and any effort of stereotyped thinking.”

13 - The sleeper and the shore

Meanwhileproject.ltd started as a one-man-project. After several years of playing guitar in miscellaneous rock bands in cologne, the idea came to my mind, that it would be the right point of time to make some music on my own. "Meanwhile", I thought, "I could create something different..,, something BIG, maybe an electronic-ambient-guitar album or something..."

I wrote some songs, that wouldn´t work with my bands, while I was waiting for a complete change of the life I had before (well, this is probably another story ….). So it all started with my guitar, certain effects, a new midi-keyboard and a computer. The first weeks passed away as I had to learn something about using my virtual recording gear, after that I produced several tracks in another wide stretch of time. After a few months of sweat, anger and work I had an output of about 10 songs, completely mixed and mastered. Awesome feeling!

I was happy and proud and - I threw it all away... Well, of course I liked the instruments and sounds, at least somehow, I liked the melodies and for sure I liked the songs as a whole, but... I needed more! I needed REAL drums, a REAL piano and other non-virtual instruments. And, maybe most important, I needed REAL voices, I mean REALLY good singers, because my so well planned electronic-ambient-guitar-chill-out-whatever album was in actual fact going to be a POP album, maybe an alternative-pop-ambient album, or better: an indie-singer-songwriter-folk-alternative-pop-ambient-chill-album!

So another year of rehearsing, recording, erasing, re-recording, mixing and mastering followed. For a limited period of time I played in a band again – with a bass man, a drummer, a trumpet player and two singers. Meanwhile, after taking a really long road, there was this album, pure and organic instrumentation combined with ambient sounds and electronic elements, voices, guitars, beats, REAL drums and more. That's what I wanted, that's what I've got.

My soul is deep-rooted in most different musical styles, so my musical in- and output is kind of versatile. In my opinion a really good pop song has to come up with a devastatingly, emotional melody and a groovy rhythm, but it has to be kind of edgy anyhow.

As a guitarist the "six-stringed axe" means still the most familiar form of expression to me, so this is one of the common themes of the whole album, beside the application of harmonic voices and melodies.

Maybe you'll find references to things you know and hopefully like, but don't forget, I created an electronic-organic-independent-pop-alternative-folk-ambient album, not more or less, even if I totally lost the survey (and never found it again...). Maybe next time I'll do rock music again, or reggae-rock-soul-pop, or... who cares...

Uploaded by Weirdomusic on September 23, 2008